Centrifugal molecular distillation is a purification technique, which has gained wide acceptance in the chemical, food processing, pharmaceutical, and petroleum industries as well as the specialty chemicals industry. The PILOT-15 utilizes this technique for pilot plant and medium production needs on a continuous basis.

The PILOT-15 is a complete distillation system including all of the pumping, heating, vacuum generating and control equipment needed for plant operation. The small amount of floor space occupied by the unit helps make the PILOT-15, in single or multiple installations, a most attractive system. The touch screen control features an easy to follow system schematic. The PILOT-15 is designed for throughputs between 10 and 80 lb/hr (4.5 to 36 kg/hr), depending on feed material characteristics.

The major advantages to be expected from the PILOT 15 molecular still are:

The PILOT 15 is designed to continuously distill thermally sensitive organic and silicone compounds in the molecular weight range of 150 to 400 AMU at vacuum pressures from 1 to 700 X 10-3 Torr.

Some examples of distillation from the PILOT 15 include Fatty acid amides, Dimer acids, Epoxy resins, Drying oils, Monoesters, Di-octyl phthalate, Vitamin A, and Tocoperols ( Vitamin E). For more detail listing of products and table showing distillation temperature of some common products in vacuum go to  https://myers-vacuum.com/vacuum-stills/myers-still-applications/

The PILOT-15 is designed to distill materials in the pressure range from 700 X 10-3 Torr down to 1 X 10-3 Torr. The lower the pressure, the lower the heat required to effect distillation. The lower the heat, the lower the chance of damaging the product and reduces the energy costs required for the purification process. The PILOT-15 has a complete vacuum system as can be seen from the diagram. Both the degasser and the high vacuum distillation chamber have vapor traps; these vapor traps are cooled by liquid Nitrogen or equitant medium. A diffusion-ejector pump and a rotary vane vacuum pump evacuate the main chamber. The degasser has a separate rotary vane vacuum pump. There are three regions of pressure monitoring. This enables the operator to get accurate pressure measurements in the three critical areas: the degasser, the high-vacuum chamber, and the fore line.

The PILOT-15 is designed as a continuous flow, vacuum distillation system. The diagram illustrates the flow of material through the still.

The product path through the PILOT 15 is heated in separate zones. The zones can be temperature regulated for conditioning of the product for various steps in the process. They are the degasser feed line, the degasser wall, the rotor feed line, rotor heater temperature, distillate line and residue line. 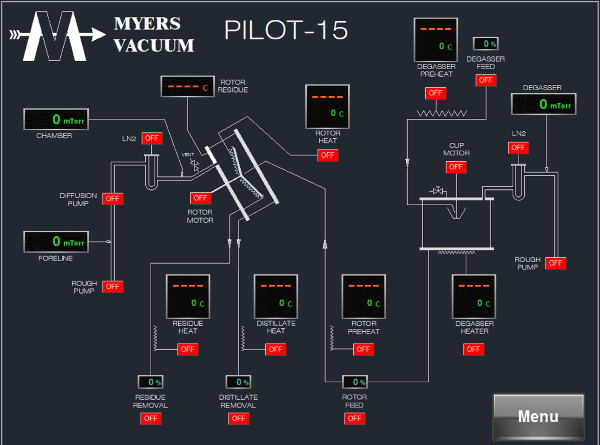 All of the readouts and controls are conveniently grouped on the control panel mounted on the still.

Controls of all vacuum pumps and feed pumps are also located here.

All electrical circuits are protected by fuses.

The PILOT-15 Control Center controls and displays the following:

The operator controls the process by setting the feedstock rate (How thick the material will be on the rotor) and the rotor heater temperature.

Preheated material enters a rotating cup within the degasser and is spun onto the heated walls to quickly out gas the material. The media runs down and is collected on the heated base. Degassed material passes, via a pipeline, to the distillation chamber feed pump. 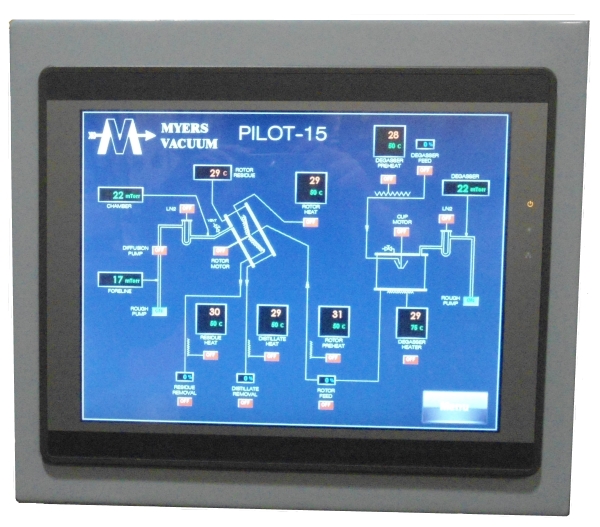 From the feed pump the material passes along a length of pipe, which is heated to reduce any heat lose, before entering the distillation chamber. In the distillation chamber the material is introduced onto the center of the spinning rotor disk and is spread across the heated surface. The surface area increases exponentially as material travels across the disc thus exposing more material to surface for evaporation as it travels across. The material will separate into a vapor phase, the distillate, depending on the operators’ combination choice of temperature and pressure. The remaining material is the residue.

The distillate vapor is condensed on a water-cooled surface and flows down the chamber walls and out to the distillate pump. The residue passing across the full surface of the rotor is collected in a surrounding gutter and flows out of the chamber to the residue pump. On the exit of each pump is a non-return valve to isolate the distillation chamber from atmospheric pressure.

Feed, distillate, and residue storage tanks are supplied by the customer, unless specified otherwise. Both the degasser and distillation chambers have independent vacuum pumping systems which are protected with individual traps.

The traps in each vacuum line are refrigerated to protect from cross-contamination with the vacuum pump fluids. Both traps have drain taps, which are used to empty the traps while the PILOT 15 is shut down and at atmosphere. Trap collection vessels or gear pumps can be added to drain the traps while the PILOT 15 is running and are supplied as an option. The degasser vacuum pump is a direct drive rotary vane positive displacement pump with exhaust to atmosphere. The distillation chamber vacuum pumps are a diffusion-ejector pump backed by a direct drive rotary vane positive-displacement pump with exhaust to atmosphere. System pressures are monitored at the degasser, distillation chamber, and the ejector pump fore line.

The PILOT-15 is a very complete unit. The only external requirements in addition to power, low pressure air, and water are