Centrifugal molecular distillation is a purification technique which has gained wide acceptance in the chemical, food processing, pharmaceutical and petroleum industries as well as the specialty chemicals industry.

The principle behind the Myers Vacuum Centrifugal Molecular Stills is low pressure and extremely short residence time. Once the feed material has been degassed, it flows onto the spinning heated disc. Distillation takes place in less than 1 second as the material expands out exponentially on the radius of the disc. The residue is caught within a gutter surrounding the rotor and then flows down to the collecting vessel below. The distillate condenses on the outer shell of the still and flows by gravity to another collecting vessel also below the still.

The major advantages that can be expected from the Lab-3 Molecular Still are:

The Lab-3 has a 3 inch diameter rotor with a throughput capability of about 0 – 2 lbs/hour. Like the other still models, the Lab-3, with the pumping system will operate around 1 micron pressure. 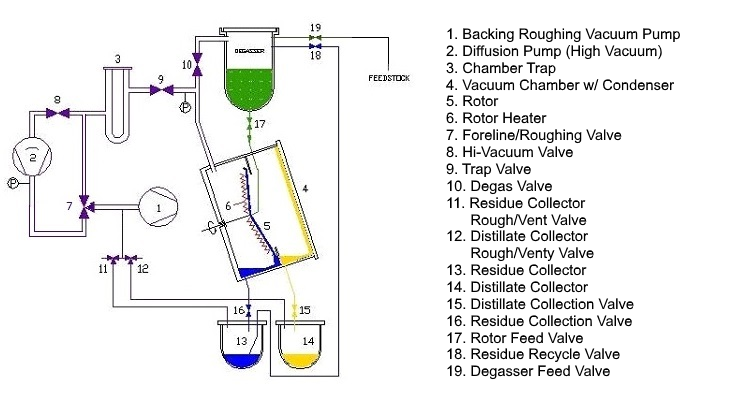 There are several important design features on the Lab-3 that make it an outstanding tool in the laboratory:

The Lab-3 is designed to distill thermally sensitive organic and silicone compounds in the molecular weight range of 150+ AMU at vacuums from 1 to 700 X 10-3 Torr. Some examples of distillation from the Lab-3 include Fatty acid amides, Dimer acids, Epoxy resins, Drying oils, Monesters, Di-octyl phthalate, and Vitamin A Tocopherols (Vitamin E).

The Lab-3 high vacuum still is designed as a batch / continuous distillation unit. Figure to left illustrates the flow of the process material through the still. Green designates Feed material, Blue Residue and Yellow distillate.

The material flows by gravity from the Degasser reservoir: where the material is also degassed by removing small amounts of low boiling materials and trapped gases to enable more efficient vacuum distillation at the next stage.

The material then flows via the rotor feed valve (17) on to the center of the heated, spinning rotor (5) in the high vacuum distillation chamber. On the rotor, the material spreads out into a thin film (0.05 mm thick).

As the material spreads across the rotor, a certain portion (the distillate) evaporates. The fraction which distills is selected by the operator. Once set, this remains constant until the run is completed or until new conditions are selected.

Depending upon the feedstock material or process requirements, either the distillate or the residue may be your final product. In many cases both may be of value.

All manifolds are stainless steel with standard vacuum fittings for easy disassembly/assembly for cleaning.

The mechanical pump is a direct drive rotary vane vacuum pump. It is used as a forepump for the diffusion pump, and to rough pump the degasser, the distillation, the distillate and the residue chambers.

The High Vacuum pump is a rugged 2″ diffusion pump enabling the distillation chamber to operate under high vacuum.

An automatic temperature controller monitors the output water temperature of the diffusion pump and meters the flow of cooling water for maximum pump efficiency and minimal amount of water usage.

The trap valve removes easily condensable-vapors, or low boiling volatiles so as not to contaminate the oils in the mechanical and diffusion pumps and to prevent oil in those pumps from back streaming into the chamber. 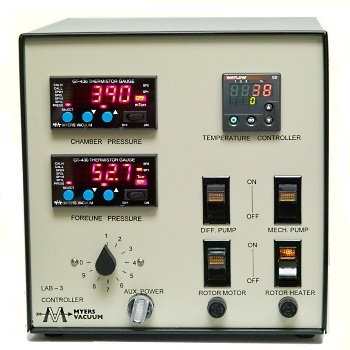 The Lab-3 control center contains all of the controls and readouts required for operation:

Vacuum Readout: There is a two (2) – station pressure monitoring section with leak detect mode. This enables the operator to get accurate pressure measurements in the distillation chamber and on the foreline. Plus leak detect function simplifies system check out after reassemby.

Temperature Readout: There is an SCR temperature controller which enables the operator to set and control the temperature of the rotor.

The thermocouple is located inside the rotor for true film temperature measurement.

The control center also provides a variable power switch for the addition of heat tapes if desired.